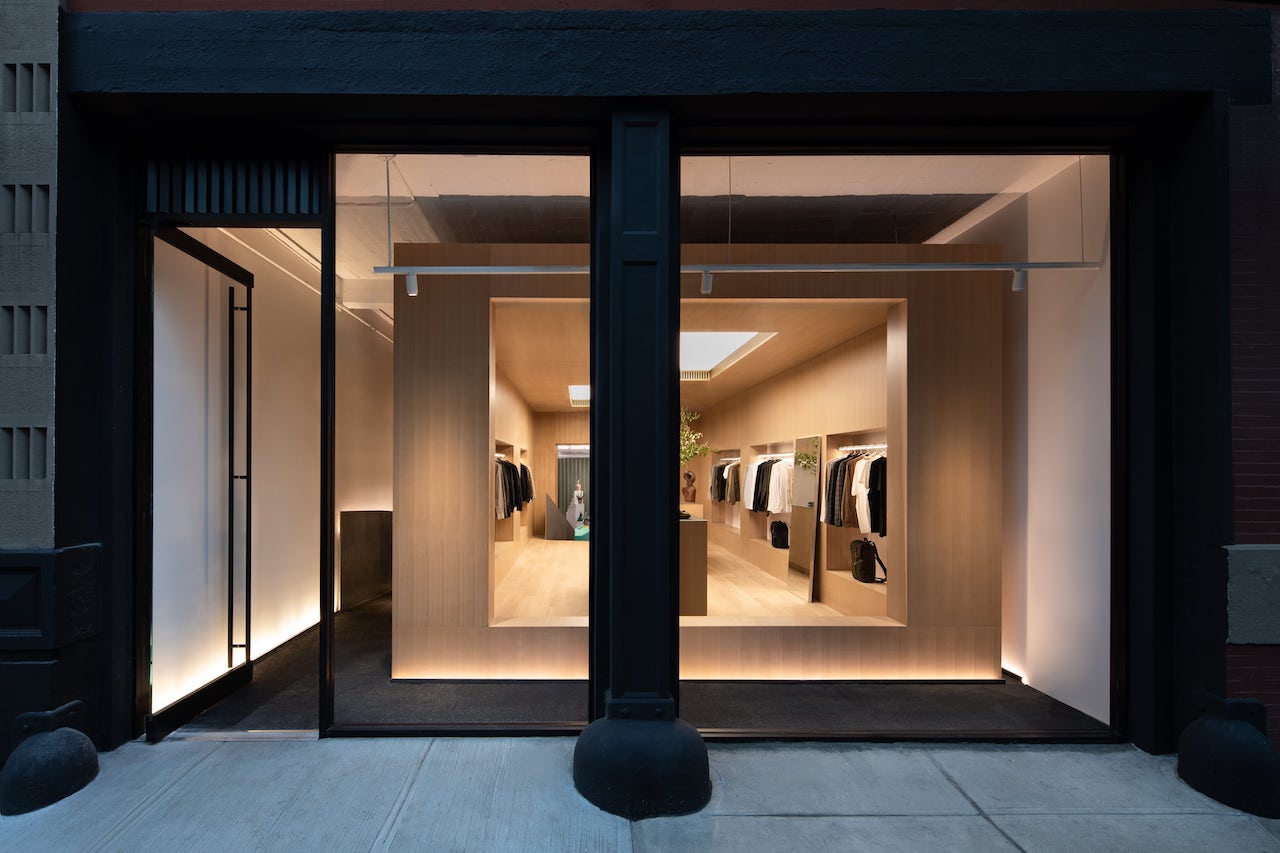 O.N.S opened its new flagship store on 18 September in the iconic Nolita neighborhood in New York.

O.N.S., which stands for One Nice Shirt, was founded by Brian Chung, whose family is in the apparel manufacturing and textile development business in Hong Kong. He created the brand around six years ago out of a need for a wardrobe that felt comfortable and sophisticated at the same time, as he and a lot of his friends were transplants and expats living in all corners of the world.

originally, it offered only shirts, but has since expanded into a full collection for men as well as home and lifestyle products such as lighting fixtures, water bottles, scented candles and even greeting cards.

the team worked with the space originally programmed as a garage, employing innovative plant-based asphalt as a retail floor - the first of its kind - continuing the urban street, drawing visitors directly from the exterior into a dynamic store environment. 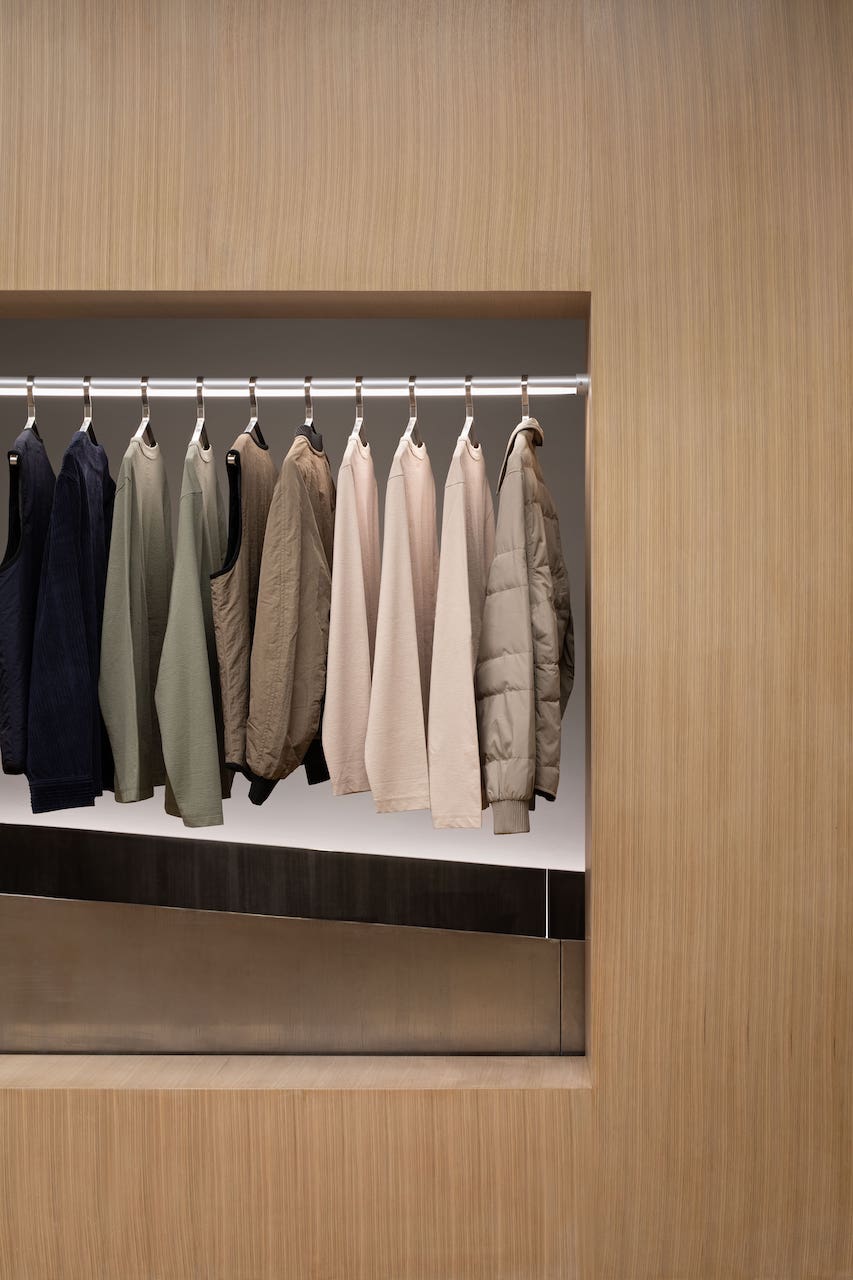 for the past several years, O.N.S. had operated a store on Greene Street, but Chung felt the neighbourhood in SoHo was changing and sought to move closer to what he sees as like-minded brands such as Noah and Kith. O.N.S.’s former space, which is located across the street from Yves Saint Laurent, will be taken over by Alexander McQueen, he said.

the Mulberry store was designed by COLLECTIVE (Hong Kong) & highlights of their work include designing the Bauhaus Museum in Germany, the first Aesop store in Macau China and the Nike Vaporscape concept store/video campaign. Tang Kawasaki Studio (New York) handled the execution of the store and they are known for their work on the Bushwick tower as well as various residences across Brooklyn & Manhattan.

the store, which was once a garage, uses plant-based asphalt for the floors and features a 100-foot-long movable wall covered with wool; 65 feet of custom stainless steel ramps and stairs to create a five-foot change in the level of the store; custom cast resin furniture; Italian tile for the fitting rooms and a custom fiberglass sculpture created by a New York yacht-building workshop.

in its former location in SoHo, O.N.S. had created a true community-oriented space where it hosted artist showcases, events and panels, a strategy it will continue in the new site.

steel railings, ceramic tiles and asphalt flooring are among the references Collective has taken from the streetscape to guide the store's design.

to balance the dark colours and textures of the flooring the studio has inserted pops of colour using light blue tiles on the changing room pods and blue and green counter surfaces. 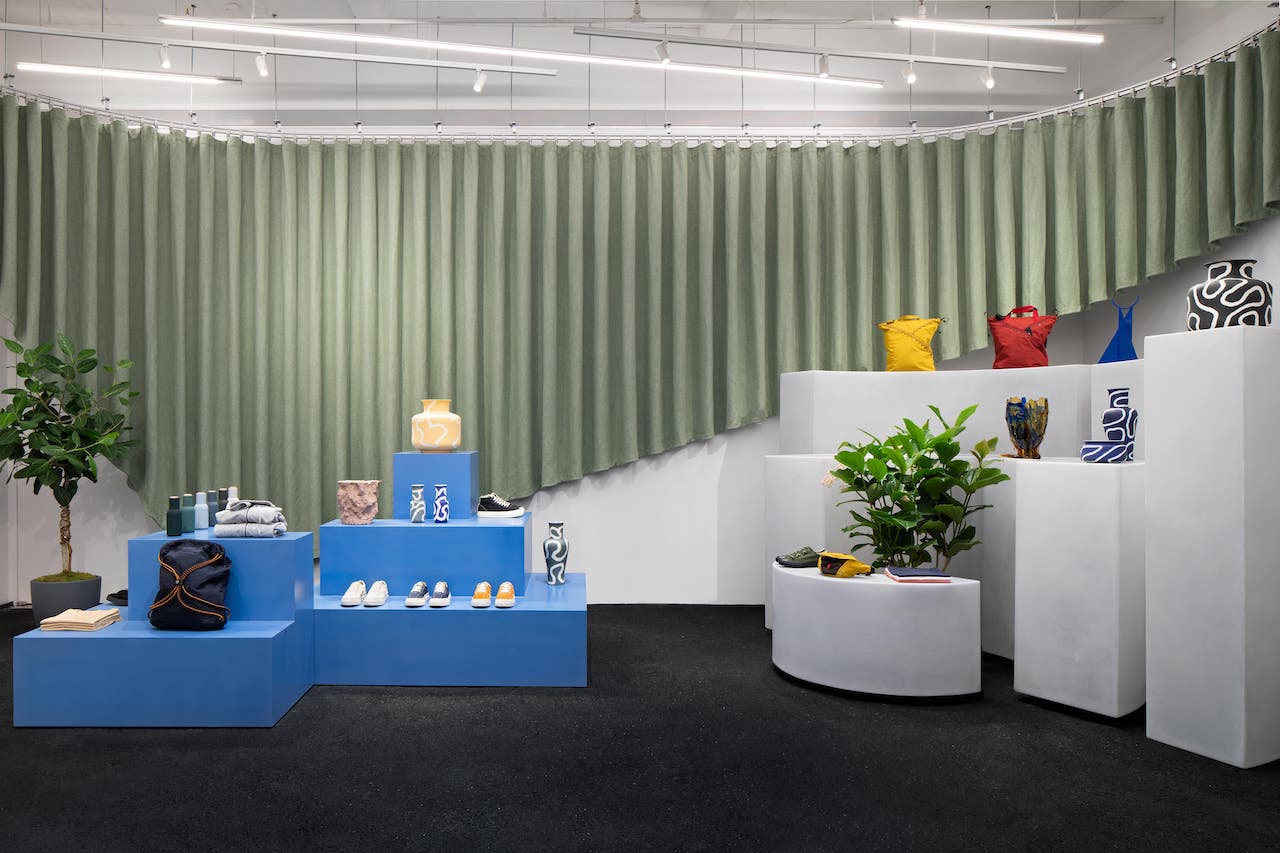 "the material we used in the store were carefully chosen for the feeling of the street – ceramic tiles, steel ramps, fibre glass objects while their bright array of blue and green colours balance out the crudeness of the black asphalt and steel," Collective said.

pale wood floors and wood panelling cover the walls in the front room of the store, which the studio conceived as a "standalone wooden box". In the space there are two wood counters for displaying accessories, while rectangular cutouts in the walls to hold clothing racks.

an asphalt ramp replaced the existing wheelchair lift to create an accessible pathway from the street into the storefront and to the rear of the space where the studio has constructed a large stage.

(above) Italian Mutina Ceramics tiles designed by Ronan and Erwan Bouroullec were selected for the fitting room towers.

O.N.S. is primarily direct to consumer, a channel that Chung said has been growing since the pandemic. In addition to the Greene Street flagship, the brand has also operated a couple of pop-ups in SoHo and the Lower East Side, but Chung believes the time is right to set down permanent roots.

“SoHo wasn’t where I wanted to be and I’ve always liked being on a side street,” he said of the new location. “Williamsburg is too touristy and commercial and Bleecker Street is not there yet, but NoLita has a lot of cafes and residential, too. so that’s where we want to excel.” 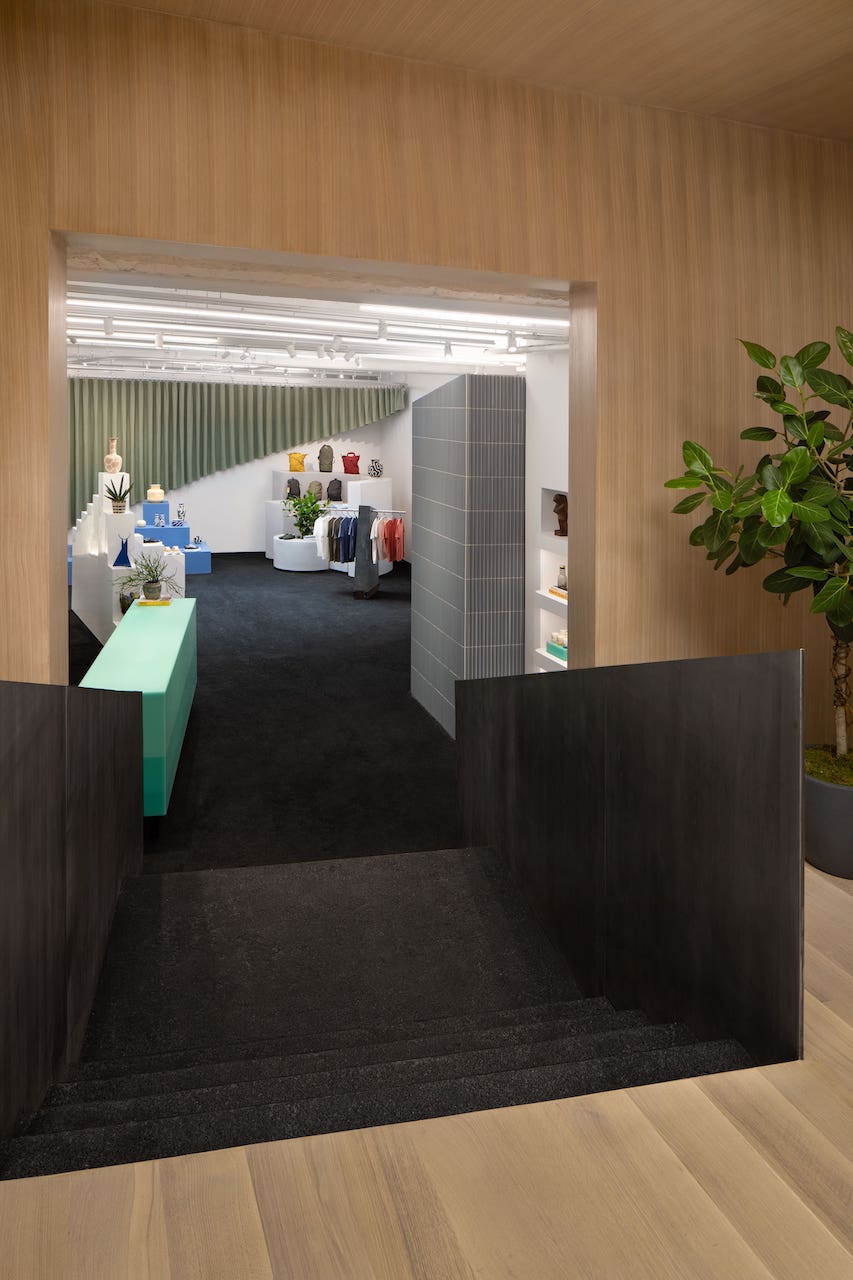 O.N.S. also operates three stores in Hong Kong and is hoping to open another store in New York City within the next two years.  although he’d one day like to expand to Los Angeles as well, he said opening a store there would only make sense when the brand expands its customer base in that community to the point where it can support a retail store. “we’re waiting until it’s the right time from a data standpoint,” he said.

Although Chung is hopeful the Mulberry Street store will perform well, he knows it’s not going to be easy opening a flagship in the midst of a pandemic. “we’re hoping for the best, but preparing for the worst,” he said.

text: extract from WWD and DEZEEN.

shop b6-7, the landmark atrium, central